Last week, I had to opportunity to take six Scouts from our Troop to Winter Camp. I was able to spend 5 days in the woods at Camp Avondale, just west of Clinton, Louisiana. It also brought me face to face with an interesting historical paradox that was too good not to share. Turns out there is a direct, tangible connection between Camp Avondale and the Japanese attack on Pearl Harbor.

The Dining Hall was built to accommodate 125 persons. It is rustic, with screened windows and no climate control, save a couple of exhaust fans and some recently added ceiling fans. It currently serves around 300 patrons on a regular basis. It is hot in the summer, cold in the winter and generally crowded. The kitchen is beyond capacity. However the amazing thing about the Avondale Dining Hall is that it consistently serves some of the best camp food anywhere. The food service crew does the best they can with what they have to work with. Although they refer to it as the “Road Kill Cafe'”, no one ever has any complaints about the quality of the food. I have eaten camp food all of the United States and, hands down, the meals at Avondale are the standard by which others are judged. As Cookie said in “City Slickers”, ‘the food is hot, brown and plenty of it.” 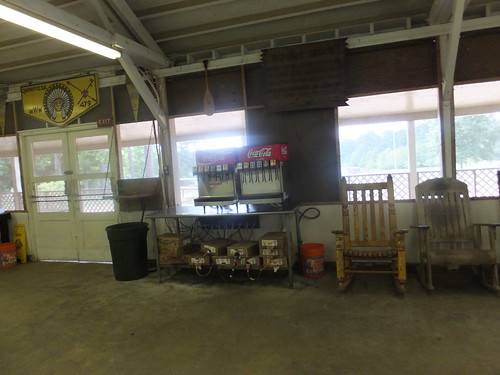 So, it is not surprising that high on the list of capital improvements at Camp Avondale is a new dining hall. Money has been set aside, additional funds are being raised and plans are being drawn up. Last Monday night, we had an adult leaders meeting with our new Scout Executive, Camp Director and several Council Board members to discuss upcoming events, including the dining hall project. During this discussion, one of the Board members mentioned the need to replace and update the kitchen and, in the process, made this interesting statement:
“We even have a mixer back there that was on a battleship at Pearl Harbor.”

What? Did I hear that right? That may be the kind of statement that some people let go in one ear and out the other, but not me. Have had the bait wiggled in my face, I had to know the rest of the story. After the meeting, I sought out the camp rangers, who maintain both the kitchen equipment and most Avondale legends, and found out about an interesting tale.

The Hobart Manufacturing Company was founded in 1897 in Troy, Ohio.  For the past 117 years, it has manufactured and sold commercial kitchen equipment, including ovens, stoves, mixers, slicers, griddles, steamers and scales, to name just a few.  Even if you don’t know the name, if you ever strolled through a commercial, school or institutional kitchen, Hobart equipment was all around you.   Hobart built things to last.

So, the first piece of the puzzle is a commercial floor mixer that has been in the kitchen at Avondale for over 57 years.  It is not very sexy, but it works and has prepared no telling how many meals over the years.

This is where the story gets interesting. It seems that a dozen or so years back, someone at Avondale contacted Hobart looking for parts or a copy of a wiring diagram or some other information to keep that mixer running. When Hobart looked up the serial number, it found out some fascinating information. The mixer was originally built in 1936. Turns out that Hobart keeps a list of its longest running equipment that they can locate. They determined that the Avondale mixer was number 2 on the list of oldest Hobart mixers still in use. Number 1 on the list was still in use at the Orleans Parish Jail in New Orleans.

They also discovered that when it was new, the Avondale mixer was sold to the U.S. Navy and was installed on the battleship USS PENNSYLVANIA.

On December 7, 1941, with the Hobart mixer in her galley, the PENNSYLVANIA was in dry-dock at Pearl Harbor when the Japanese attacked and plunged the United States into World War II. Although damaged, PENNSYLVANIA, and the mixer, survived the attack went on to serve throughout the war. For the next 4 years, PENNSYLVANIA sailed the Pacific, participating in campaigns in the Aleutian Islands, Kwajalein, Mariana Islands, Saipan, Guam, and Okinawa. In late October, 1944, she participated in the Battle of Suriago Strait, the last battleship to battleship confrontation in history. During the Guam campaign, she fired more ammunition than any other warship in history during a single campaign. All with our Avondale mixer on board, working every day to feed her 1,400 man crew.

Late in the war, PENNSYLVANIA was torpedoed by Japanese aircraft and was subsequently scrapped. Somewhere along the way, her equipment was salvaged, including one 10 year old Hobart mixer, which eventually found its way to the kitchen at Camp Avondale over 56 years ago. So, as it turns out, our World War II artifact at Camp Avondale is not a ceremonial cannon, ship’s bell, a flagpole or a tank or truck. It is an almost 70 year old commercial mixer that, as recently as last week, was still mixing away, feeding hungry scouts. Pretty cool, huh?

It turns out that the floor mixer is not the only piece of Avondale equipment that is in the Top % list. Turns out that we also have a smaller mixer that is Number 4 on the list!